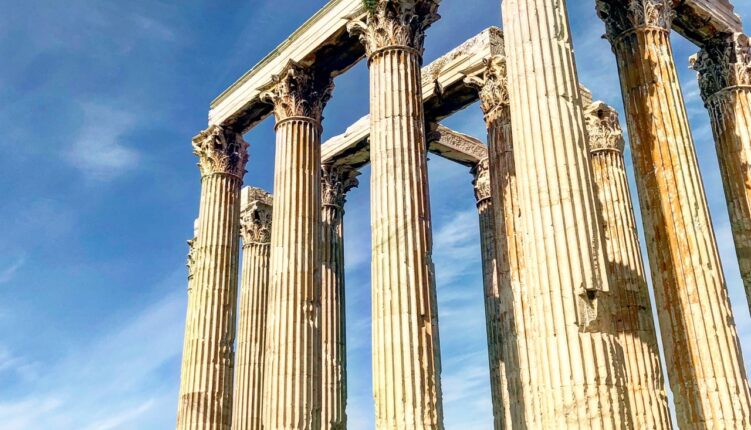 One of the many amazing things about Athens is that everywhere you look there are reminders of the city’s past. Ancient Athens lives on in the present, thanks to the many beautifully-preserved archaeological sites across the city. Athens has a long and rich history that goes back thousands of years, many of which come with incredible stories and legends. If you really want to explore the ancient city, these are the ruins in Athens that you absolutely can’t miss! Step back in time and discover Ancient Greece first-hand.

Perhaps the most-recognized monument in Athens, the Parthenon has been looking over Athens for more than 2000 years. This ancient building served as a temple to the goddess Athena, the patron of Athens, and actually replaced an earlier version of the temple. Construction began in 447 BC and took about 15 years to fully complete. The Parthenon remains so special and important because of the high level of artistry and skill it took to create such a building, and retains to this day.

The Parthenon is in the Acropolis. The Acropolis is an ancient citadel where many of the most famous ruins in Athens can be found, including the next ruins we are introducing, Theater of Dionysus. From the adorning sculptures to the iconic columns, the Parthenon is thought by many to be the epitome of the Doric architectural period. No trip to Athens is complete without taking in the views below from the Parthenon. This site is where you can see the most important ruins in Athens, without a doubt!

The Theater of Dionysus, the world’s first theater, sits at the foot of the Acropolis. Its namesake is the god Dionysus, who was the patron of theater (and wine!). Amazingly, this ancient theater could seat up to 17,000 people, meaning it was a great location for ancient Greek celebrations. Greece is known for its works of theater that were written and produced during this period, and it appears that the Theater of Dionysus is where it all began. Greek tragedy is credited as originating at the theater, and the rest is history! Greek theater developed here over the centuries, and had a global influence.

The Temple of Zeus (Olympeion)

Today, all that are left of the once-enormous Temple of Zeus are columns, but it is still a beautiful example of ancient Greek architecture. An interesting fact about this temple is that it took more than 600 years to fully complete. This temple is one of the best and most famous marble buildings ever built. The long history of this buildings reminds us of how far back Athens can trace its history. The Temple of Zeus isn’t the most complete temple in Athens, but the ruins leave much to the imagination.

The Temple of Hephaestus

Near the Acropolis is the Ancient Agora of Athens, which was the assembly, or meeting place of ancient Athens. Within the complex, there are many ancient ruins that stand in wonderful condition to this day. One of these monuments is the Temple of Hephaestus, which has had various uses throughout the centuries. This temple was dedicated to Hephaestus, the Greek god of forge and fire, and due to that there were many metal and woodworking workshops surrounding the temple. Construction began in 449 BC and finished in 415 BC. After the Greeks converted to the Greek Orthodox faith, the temple became a church until the 19th century. Now it is one of the ruins in Athens that visitors love to admire and marvel at.

See more: Everything You Need to Know about the Athens Digital Arts Festival

The Martis Bracelet: A Sure Sign of Spring in Greece

Do you want to explore all that Athens has to offer? Make your travel planning as easy as can be and reserve your holiday accommodation with Olala Homes!

7 Best Cafes in Athens for Coffee Lovers of Any Kind