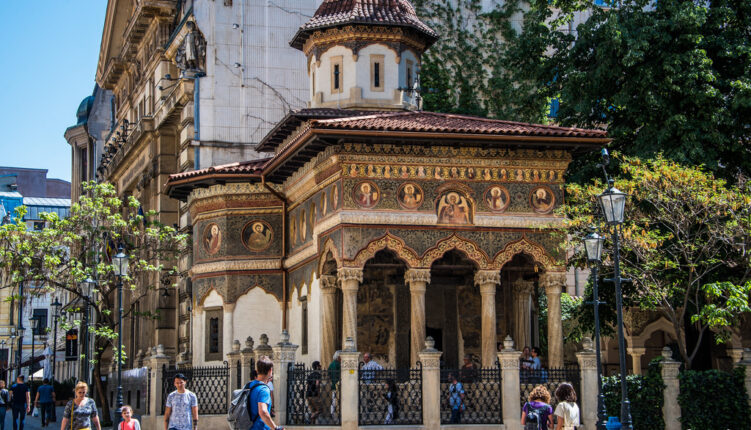 In recent years, Bucharest has been starting to get the recognition it deserves for being an amazing European tourist destination. Rich in history and culture, Bucharest has something for everyone! The heart of the city is Old Town Bucharest where its origins lie. It’s here where you can really dive deep and immerse yourself in Romanian history and culture. For the best experience, make sure to put these historical sites on your list!

The original Column stands in Rome, but Bucharest boasts a pretty amazing reproduction of this historic monument. Trajan’s Column in Rome marks the victory of Emperor Trajan in the Dacian Wars and dates back to 113 AD. Bucharest’s version is much more recent, and can be found next to the National Museum of Romanian History. This majestic column is inscribed with battle scenes, telling the tale of the fierce wars between the Romans and the Dacians. Also, the artwork itself is a marvel and a sight to behold. If you can’t see the original in Rome, you need to see it in Old Town Bucharest!

A popular pedestrian zone in Old Town Bucharest is Lipscani Street, which dates back to the Middle Ages. A fun fact about this street is that it was built by the legendary Vlad the Impaler! It was once very important for trade, and all kinds of workshops and smiths lined the road. Today, it is one of the most interesting areas for tourists in Bucharest. Many of the street’s buildings were restored, and it now houses many bars, shops, and restaurants. Lipscani Street is the heart of Old Town Bucharest due to its importance and history. You can take a stroll down Lipscani and really discover the essence of Old Town Bucharest!

Next, make a stop at Stavropoleos Monastery, a church which has withstood earthquakes and the test of time in Old Town Bucharest. Stunning architecture and Byzantine music are the highlights of this church, to name a few. Visitors can hear the choir sing traditional songs as they take in the atmosphere of the church. Stavropoleos has stood since 1724 and has almost 300 years of history to explore. It was once a part of an inn, but the monastery is the only part of the original structure that has survived throughout the years. As there are services every day of the week, be sure to consult the schedule to properly plan your visit.

The most beautiful banks in Bucharest are in Old Town, as it was the financial capital of the country until the last century. Stop by the National Bank on Lipscani Street, which is an impressive example of Neo-Classical architecture. This is one of the shining examples of what Bucharest’s past looked like, as much of the city has changed over the last decades. There are several other banks in Old Town Bucharest, similar in style and construction. Be sure not to miss these if you love architecture!

Check out the old court ruins

Lastly, leave plenty of time to explore the old court in Old Town Bucharest. The Old Princely Court is the court of Dracula himself, or Vlad the Impaler. Since it was built in the 14th century, many call the old court “ruins,” but the structures are actually in quite good shape for what is left. As it has survived more than 500 years, the old court prides itself on being one of the few sites in Old Town Bucharest to claim this fact. Take a real step into Bucharest’s past as you walk through the court that housed princes for more than 400 years.

Visit the 4 Most Interesting Museums in Bucharest

Want to see Old Town Bucharest for yourself? Enjoy the Romanian capital and stay with us at Olala Homes!