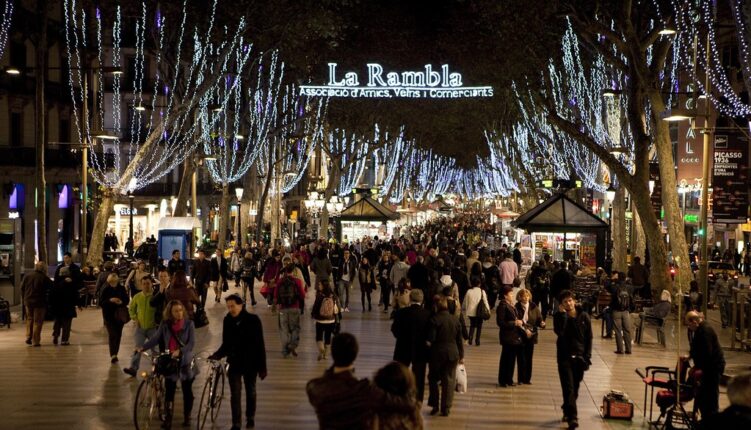 A city as unique and interesting as Barcelona has no shortage of fun holiday customs to explore and experience. If you’re spending the most wonderful time of the year here, here are some of the holiday traditions in Barcelona that you need to know about. And even if you’re celebrating in your home city, these are some fun ways to change up your normal customs and celebrations!

One of the strangest but most important holiday traditions in Barcelona is the Caga Tió, or the Catalan pooping log. Yes, you read that right. Every Catalan home has a tió, which come in different shapes and sizes. However, the log always has a painted face on one end and wears a red barretina, a traditional cap. The other end is usually covered by a blanket to keep him warm. The log makes its appearance on December 8th, a religious holiday in Spain. From this day until December 24th, children are expected to care for the log by feeding it nougats, nuts, and other snacks.

On the 24th, after weeks of fattening up, children sing the Caga Tió song and beat him with a stick until he “poops” out presents and gifts for them. After singing and beating the log, the children lift the blanket to see what the tió has produced for them. As strange as it is, this Catalan tradition is a highlight of the holiday season for children!

In the same vein, Catalans have another unique cultural element that they add to their Christmas celebration. While it’s typical for families around the world to set up a nativity scene in their homes during the holidays, it’s less typical to find a figurine of a man squatting with his pants down, ready to relieve himself. El Caganer, or “The Pooper,” is always among Catalan nativity scenes to bring luck to the household. The legend says that his excrement helps to fertilize the ground in the nativity scene, and reminds us of nature.

The traditional caganer wears a barretina, like the Caga Tió, and old-fashioned peasant clothing. However, the caganer has become somewhat of a pop culture phenomenon over the years in Catalonia. Today you can find figurines with the likenesses of football players, politicians, actors, and other celebrities to adorn your nativity scene with.

What are the holidays without a spread of delicious, seasonal dishes? One dish that’s always on the menu on Christmas Day in Barcelona is the irresistible sopa de galets. This soup gets its name from the galets, or the pasta shells, that fill each tasty bowl. It’s the first course, before the heavier meat dishes and desserts, but this soup is actually quite hearty. In addition to pasta, sopa de galets also typically contains meatballs made from pork and beef. The recipe can vary: some people prefer to stuff the shells with meat, others prefer to make small meatballs and serve several in a bowl, or some make one big meatball for each bowl. It’s one of the tastiest holiday traditions in Barcelona that you can find in many restaurants throughout the Christmas season.

There’s no better way to ring in the new year in Spain than with a bowl of 12 grapes, popping one in your mouth each second for the last 12 seconds of the year. Friends and families huddle around the TV together as the countdown begins, each with their grapes at the ready. These 12 grapes, one for each month of the new year, give the eater good luck for the next year. As you can imagine, trying to fit 12 grapes in your mouth in 12 seconds is actually quite a challenge, so you’ll surely be starting off your new year with plenty of laughs.

Did you know that Santa Claus isn’t the one to bring presents to children in Spain during the holidays? Instead of waiting for St. Nick to bring them goodies on Christmas Eve, Spanish children are overcome with excitement on January 5th waiting for Los Reyes, or the 3 Kings. The 3 Kings were the ones to bring gifts to the baby Jesus in the nativity story, so it’s only fitting that they bring gifts to children in Spain, a historically Catholic country, as well. Children leave out snacks for the kings and their camels on January 5th and wait until the next morning to see what treasures await them.

One of the most exciting holiday traditions in Barcelona on this day is the 3 Kings parade. The official parade, on January 5th, sees the kings, their camels, and other fantastic creatures and characters take to the streets of the city center, throwing out candy by the bucketload. Many neighbourhoods across the city also do their own smaller parades for those who don’t want to pack into the downtown area. Adults and children alike get into the holiday spirit as they await the coming of Los Reyes!

See more: 10 Spots Where You Can Get the Most Delicious Bread in Barcelona, A Checklist of the 5 Must-See Churches in Barcelona, An Insider’s Guide to Enjoying the Festes La Mercè in Barcelona, Get to Know the Districts of Barcelona, 9 Beaches Near Barcelona that Make for Perfect Day Trips

If you’re staying in Barcelona this holiday season, count on Olala Homes as your cozy home-away-from-home!

5 Handpicked Places You Should Not Miss in Hospitalet