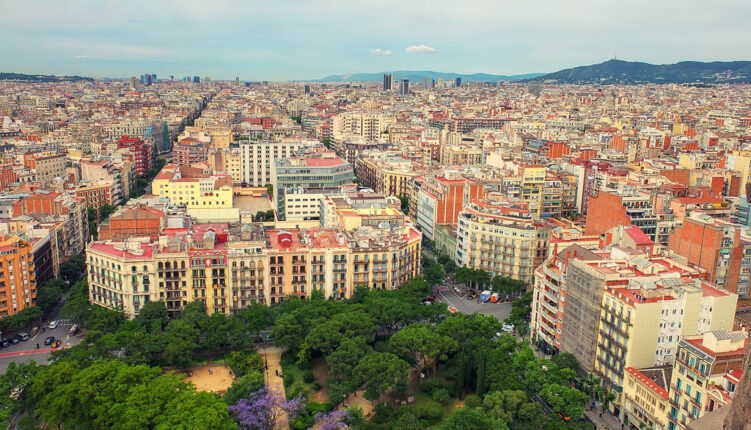 Chances are when you think of Barcelona, you think of the most famous neighborhoods that you see in magazines and on postcards. But did you know that there are 10 unique and beautiful districts of Barcelona? Here’s a quick look at the highlights and history of each one.

Ciutat Vella is the heart of Barcelona, the city’s old town and most historical center. This district includes the neighborhoods of Barri Gòtic, La Barceloneta, El Raval, and Sant Pere, Santa Caterina i La Ribera. Points of interest here include the Barcelona Cathedral, Las Ramblas, Plaza Catalunya, and so many others. The best thing to do in Ciutat Vella is simply get lost in the small winding streets. Here is where you will get to know Barcelona from its foundations through the present.

Eixample means extension in Catalan since it was built as an add-on to Ciutat Vella as the city grew in the 1800s. One of the most beautiful and exciting districts of Barcelona, this district includes the neighborhoods of Sagrada Famìlia, Sant Antoni, Fort Pienc, L’Antiga Esquerra de l’Eixample, Dreta de l’Eixample, and La Nova Esquerra de l’Eixample. It’s the most populated district and includes Passieg de Gràcia, where you can find Casa Battló and Casa Milà. The Sagrada Família church, another architectural marvel, is another must-see in this district. This is in addition to exquisite dining and a plethora of tapas bars to choose from.

Sants-Montjuïc covers more than 21 square kilometers, much of which is green space. It is the largest of the districts of Barcelona and includes the neighborhoods of Poble Sec, Sants, Hostafrancs, Zona Franca, Sants-Badal, Montjuïc, and more. Many of these neighborhoods were small villages that were later incorporated into the city. Interesting things to see here include Plaza Espanya and Montjuïc mountain. While there are many fabulous dining options in this district, check out Carrer Blai for a fun culinary experience as you pincho-hop your way down the street!

Gràcia is known for its lively, bohemian vibe and is a favorite of both tourists and locals alike. This neighborhood was built during the 1700s and remained a separate village until the Eixample expansion. There are 5 neighborhoods in this district, which lies just north of Eixample at the bottom of the Collserola mountains. Walking down the streets you’ll find fun bars, funky boutiques, restaurants, and cultural centers. This district is a magnet for creative types, artists, and those looking for somewhere laid-back.

Les Corts isn’t on many people’s radar except for visiting the famous Camp Nou, home to the champion FC Barcelona soccer team. However, there is so much more here to discover. It has 3 neighborhoods: Les Corts, Pedralbes, and La Maternitat i Sant Ramón. This is the most upscale of the districts of Barcelona and an important center of business. Shoppers will delight in the many stores here, as well as the wide avenues of Diagonal and Travessera de Les Corts, which are great for roaming freely. It’s a great place to stay and live if you’re looking for something outside of the bustle of the city center.

Sarrià-Sant Gervasi is quite large and has 7 neighborhoods nestled inside. The neighborhoods used to be independent towns but were unified and became all part of one district in Barcelona. This area is mostly residential and quite affluent, but there are many things to see and do here, too. See the city from above at the iconic Mount Tibidabo, discover all things science at the CosmoCaixa, or simply enjoy exploring Sarrià’s old town center. While a little off the beaten path, this district is definitely worth a look during your visit.

Sant Andreu is a mostly residential district, home to neighborhoods like La Sagrera, El Congrés i els Indians, and Sant Andreu, among others. This is where you need to go if you want to see the way real locals live day-to-day, away from tourism. That’s not to say that you won’t find anything interesting here! Stop by the Sant Andreu de Palomar church, which is more than 1000 years old. You can also take a stroll down Carrer Gran, where you can get a glimpse into what a traditional Catalan neighborhood is like. Feel like shopping? Head to La Maquinista, one of the city’s best shopping centers.

In the northeast corner of the city you’ll find Horta-Guinardó. This district has 11 neighborhoods packed inside, including El Carmel, El Guinardó, and Horta. Like Gràcia, it is at the foot of the Collserola mountains, which means that you can catch some beautiful views of the city below. A favorite lookout point, that is a must-do, is a trek up to The Bunkers to get an Instagram-worthy pic of Barcelona. Other points of interest include Parc del Laberint and Hospital de Sant Pau.

Nou Barris is similar to Sant Andreu in that it is an authentic Catalan district that’s peaceful and real. Even though its name means nine neighborhoods in Catalan, there are actually 13 neighborhoods in this district. Some of them include Porta, La Guineueta, Verdum, and La Trinitat Nova. You can enjoy a wide variety of tapas bars, parks, and shops, all for a bit cheaper than what you would pay in the city center. Can’t beat that!

Last but not least is Sant Martí, one of the most popular districts of Barcelona. It’s popular with expats due to its beach neighborhoods like Poblenou, Vila Olímpica, and La Llacuna. Also, this is home to the city’s technology hub, a huge provider of jobs for the city’s workers. Visit the Design Museum, Glòries shopping center, or simply enjoy a stroll along the beach.

See more:
9 Beaches Near Barcelona that Make for Perfect Day Trips
9 Coworking Spaces in Barcelona that Are Perfect for Digital Nomads
Seeing Catalonia Through Salvador Dalí’s Art and Life

Planning your dream trip to Barcelona? Come stay with Olala Homes, your perfect home away from home!

5 Handpicked Places You Should Not Miss in Hospitalet