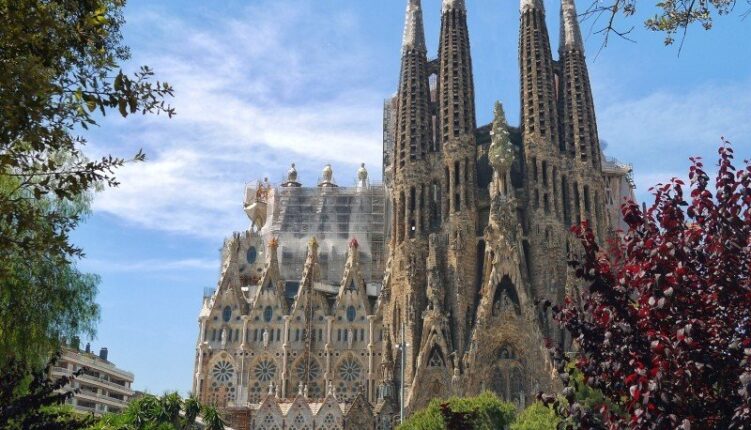 Visiting a cathedral in a foreign city is a way to see the city through a historical and architectural lens. Barcelona boasts a number of grand cathedrals that not only help to tell its story, but fill visitors with awe and amazement. These are just a few of our favorite churches in Barcelona that should be on your itinerary when you visit.

The Sagrada Família is one of the most recognizable churches in the world, as its style and architecture are unlike any other. Construction of this basilica began in 1882 and continues to this day. Antoni Gaudí, the renowned Catalan architect, designed this church with elements of nature tied into it, many of which have been added on in recent years. Seeing the Sagrada Família is a must when you visit Barcelona, both from the outside and inside. It’s highly recommended that you book your tickets in advance, as the line can get quite long.

The Barcelona Cathedral is a shining example of Gothic architecture from the 14th century. Construction spanned through the 12th-14th centuries, concluding in 1448. This is one of the most important churches in Barcelona, in the heart of the Gothic Quarter. This neighborhood gives us an interesting view as to what life was like during the city’s origins. An entry ticket lets you see the city from below as you climb to the roof among the cathedral’s iconic spires. Note that while most Gothic cathedrals have gargoyles among their rooftops, the Barcelona Cathedral has a variety of animals, including elephants and unicorns!

While you’re exploring the old city, make your way to Santa Maria del Mar. It’s even older than the Barcelona Cathedral, as construction lasted from 1329 until 1383. It gets its name due to the fact that it was built during the height of Barcelona’s maritime success. Seamen built this church to worship and pray for protection. It is another beautiful example of Catalan Gothic architecture, and its stained-glass windows are a sight to behold. It’s one of the best churches in Barcelona to visit as entrance is free, however you can book guided tours to see other areas like the rooftop, crypt, and towers. It is also the source of inspiration for the popular novel La catedral del mar. The series that is based on the book is available on Netflix.

Since you’re in the area, make a stop at Santa Maria del Pi, a Catalan Gothic basilica in the Gothic Quarter. It’s smaller than the others mentioned, but no less beautiful. It’s located just steps away from Las Ramblas, and has been able to withstand the test of time and many hardships, like fires, earthquakes, and wars. Santa Maria del Pi often hosts special events and concerts, which serve as the perfect opportunity to see this basilica up close. You can buy your ticket to visit at the church’s entrance.

The Sant Felip Neri church is much younger than the other churches in Barcelona that we’ve mentioned. This church was finished in 1752 and is near Las Ramblas in the heart of Barcelona. It has a small plaza in front with a fountain and some trees. However, when you take a closer look at the church’s facade you’ll notice something interesting. The pockmarked walls are the same as they have been since January 30th, 1938, when Franco’s regime bombed the church during the Spanish Civil War. The facade was never fixed so that it could serve as a reminder of the events that took place during this time period. This plaza also appears in one of the scenes in the movie Perfume: The Story of a Murderer.

Make the trek up Tibidabo to see the the inspiring Sagrat Cor. A relatively modern addition to Barcelona, it was finished in 1952. It has a neo-Gothic style that is reminiscent of the Barcelona Cathedral. On top there is a statue of Jesus Christ that recalls Christ the Redeemer in Brazil. This church looms over the city and can be seen from several vantage points. Entrance is free but there is a charge to visit the church’s terraces. It’s the perfect way to end your trip to Mount Tibidabo!

See more:
An Insider’s Guide to Enjoying the Festes La Mercè in Barcelona
Get to Know the Districts of Barcelona
9 Beaches Near Barcelona that Make for Perfect Day Trips
9 Coworking Spaces in Barcelona that Are Perfect for Digital Nomads
Seeing Catalonia Through Salvador Dalí’s Art and Life

If you’re planning your dream trip to Barcelona, book your amazing vacation rental with Olala Homes for the most complete experience!