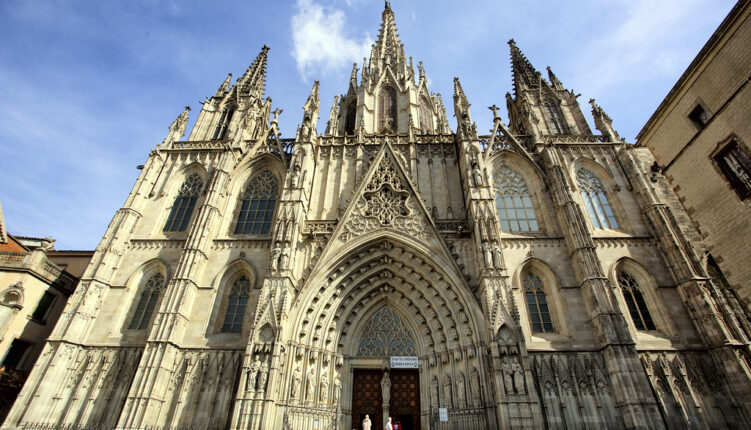 The Gothic Quarter of Barcelona is often the first stop for many visitors. It’s the epicenter of much of the city’s history and activity, not to mention the home of Barcelona’s origins. With over 2,000 years of history to discover in Barcelona’s most famous neighborhood, it’s impossible to ever get bored here. To make sure you get the most out of your visit to the Gothic Quarter, here are 10 things that you just can’t miss.

Your first stop in the Gothic Quarter of Barcelona should be the world-famous Las Ramblas. This wide, pedestrian-friendly boulevard stretches for more than a kilometer, starting in Plaça Catalunya and stretching down to the sparkling Mediterranean Sea. In the past Las Ramblas was lined with flower kiosks, many of which are still there. However, you’ll also find street performers, musicians, shops, cafés, restaurants, and much more. Take a stroll at a leisurely pace under the shady trees and soak up the little world that is Las Ramblas.

2. Excite your senses at La Boqueria

As you walk down Las Ramblas, make a pit stop at La Boqueria, the city’s most famous food market. Early in the morning, neighborhood residents stop by to do their shopping, picking up fresh ingredients like produce, meat, fish, cheese, Spanish ham, and bread. Inside the market you’ll find several tapas bars, restaurants, and stalls where you can sample the local cuisine. It’s best to visit when you’ve worked up an appetite!

3. Take a break at Plaça Reial

Another locale right off Las Ramblas, Plaça Reial is one of the most famous public squares in Barcelona. Palm trees, bars, and restaurants line the four walls of the plaza, and in the center is a breathtaking fountain. Surrounding the fountain are antique streetlamps, designed by Barcelona’s architectural prodigy, Antoni Gaudí. Take a break and enjoy a drink or snack at any of the bars inside, or simply take a moment to enjoy the plaza’s beauty.

4. Marvel at the Cathedral

The Barcelona Cathedral, also known as La Seu, is the heart of the Gothic Quarter of Barcelona. This medieval marvel is quite a sight to see, both inside and out. Walk around the outside of the cathedral and look up. You’ll notice that instead of traditional gargoyles, the cathedral is adorned with animals like elephants, bulls, and even unicorns! The small streets around the cathedral are also quite impressive and offer wonderful 360-degree views of this architectural gem.

Els Quatre Gats is undoubtedly the most famous café in the Gothic Quarter of Barcelona. It opened in 1897 in Casa Martí, a famous home at the time and a building with quite a long history. It’s here where famous artists and architects like Pablo Picasso, Ramón Casas i Carbó, and Josep Puig i Cadafalch would meet for a coffee or meal, and it’s here where Modernisme was born. Els Quatre Gats still retains much of its early 20th-century charm and has a full menu, so you can stop in any time of the day.

Making your way through the small, winding streets of El Call is an adventure all on its own. This was the home of Barcelona’s Jewish community in medieval times until 1492. Here you’ll find remnants of the past, like Spain’s oldest synagogue, the Jewish public baths, and buildings that were once the homes and businesses of the neighborhood’s former tenants. The narrow streets and alleyways twist about, so ditch the map and enjoy getting lost in the Jewish Quarter.

Plaça Sant Jaume is a public square in the middle of the Gothic Quarter, just a few minutes’ walk from the cathedral. It’s the site of the town hall, and has served as a political center in Barcelona since the city’s origins. Additionally, it’s also the center of activity during holidays or celebrations. It’s not uncommon to see castellers building human castles stretching up to the sky, or parades and marching bands making their way through the square during cultural celebrations. During Christmas, Plaça Sant Jaume hosts the city’s nativity scene and a beautiful tree. There’s always something going on here!

8. Go back in time at the Temple of Augustus

Believe it or not, there are actually Roman ruins right in the Gothic Quarter of Barcelona! In addition to the old city walls, near the cathedral, there’s actually a temple, the Temple of Augustus, in the heart of Barcelona. This temple survived the tests of time and instead of being destroyed, a medieval building was built around it. Today you can step inside this structure and see the remnants of the temple and its pillars.

MUHBA, the Barcelona History Museum, is an excellent source of information to learn everything there is to know about the Ciudad Condal. With hundreds of artifacts on display, in addition to an excavated ruins site, this makes for a perfect stop to learn more about the city’s history, culture, and people. MUHBA also maintains several archaeological sites throughout the city for visitors to explore.

Portal de l’Angel is between Plaça Catalunya and the cathedral and has some of the best shopping in Barcelona. Zara, Mango, H&M and more line the streets leading up to the cathedral. Many of the small streets throughout the Gothic Quarter are home to unique shops, boutiques, and stores where you can buy local goods, products, and clothing.

See more: Barcelona Insider: 8 of the Best Places to Eat in Les Corts, 5 Reasons Why You Need to Visit Sitges, A Gem on Catalonia’s Coast, 5 Unique Facts and Holiday Traditions in Barcelona You Might Not Know, 10 Spots Where You Can Get the Most Delicious Bread in Barcelona, A Checklist of the 5 Must-See Churches in Barcelona

Come stay in the Gothic Quarter of Barcelona with Olala Homes, your go-to for comfort and style in Barcelona!