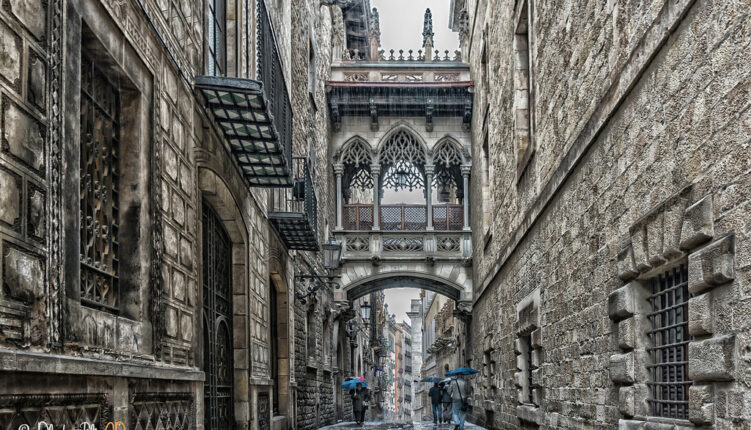 There’s just something magical about wandering the streets of Barcelona’s Gothic Quarter, getting lost in the winding sidewalks and roads. This neighborhood dates back centuries and is the very heart of Barcelona’s city center. The Gothic Quarter is where much of the city’s history lies, along with many of its top attractions. So, here are some tips and tricks to enjoy the Gothic Quarter and make your trip unforgettable.

Part of the charm of the Gothic Quarter are the winding streets, narrow alleyways, and nonsensical layout. Looking at a map might easily make you feel confused and frustrated, since the majority of the streets don’t have a clear plan, and instead wind in and out of the center. Forget the map entirely and just enjoy walking the streets. Soak up the Gothic architecture, pop in the shops, enjoy tapas at the bars, and simply breathe in the essence of Barcelona.

El Call is Barcelona’s old Jewish Quarter, inhabited during the early Medieval times through 1391. While much of the original structure hasn’t withstood the test of time, you can still get a good understanding of the neighborhood’s story and past. It’s here where you’ll find many of the smallest streets, the old synagogue, and amazing examples of the period’s architecture. Carrer de Sant Doménec de Call is a great place to start your rambling adventure. Also, to learn more about El Call and Barcelona’s Gothic Quarter, visit MUHBA, the city’s history museum.

The Barcelona Cathedral is the heart of the Gothic Quarter and a stunning example of the architecture at the time. The cathedral that we see today is built on top of remains of of an earlier church from when Spain was largely under Muslim control. Construction began in 1298 and continued until the mid-15th century. Many visitors enjoy taking a tour inside, or you can simply admire from outside by walking around the surrounding streets.

Try the local food and drink

The Gothic Quarter boasts many fantastic tapas bars and restaurants where you can sample traditional Spanish and Catalan cuisine. There are many little hole-in-the-wall places where you can try authentic dishes, tasty drinks, and dine like a Spaniard. One of the most famous restaurants in the Gothic Quarter is Els Quatre Gats. It’s been around since 1897 and was the hangout of art giants like Picasso, Gaudí, Puig i Cadafalch, and more. Step back in time and enjoy some of the local cuisine while you’re at it.

One of Antoni Gaudí’s first projects was to design the lampposts in Plaça Reial, right off of Las Ramblas. These lampposts are a beautiful reminder of the city’s past, as the plaza itself is quite modern these days. This plaza is a popular hangout since it hosts many nightclubs, bars, and restaurants. Stop by during the day time to admire the architecture, and then come back later at night with your dancing shoes!

The most famous food market in Barcelona is the iconic La Boqueria, also located on Las Ramblas. Get ready for a culinary journey as you make your way through the stalls and kiosks selling any number of fresh foods. You can buy meat, produce, cheeses, bread, and prepared foods for take away. Even more, there are several tapas bars inside the market where you can sample local fare. However, try to go early in the morning or later in the afternoon to avoid the crowds, as La Boqueria is often packed. All of the stalls might not be open at those times, but you can still see, smell, and taste so much without the chaos that peak hours bring.

Barcelona is quite safe for a big city, but it goes without saying that you should be alert when walking around the Gothic Quarter. Pickpockets love to hang out here, as it is the epicenter of tourism. Always carry your purse close to you, and it’s advisable to wear your backpack in front when going through a crowd. Keep important items out of your pockets and opt to carry them in a purse, backpack, or even money belt. Be wary that some pickpockets will pose as tourists and ask you to show them something on a map while their friend tries to swipe your bag. Unfortunately, these stories are common but if you’re smart they are completely avoidable. Enjoy Barcelona’s Gothic Quarter in a safe and fun way by following these tips!

See more: The Top 5 Places for the Most Delicious Paella in Barcelona

An Insider’s Guide to Visiting Barcelona in a Weekend

Barcelona: Quick and Easy Guide to Visiting Montserrat in a Day

After a day of exploring Barcelona’s Gothic Quarter, come back to your luxury Olala Homes apartment to kick back, relax, and enjoy your holidays!

4 Ways How Smart Locks Are Benefiting Our Guests

The Ultimate Checklist of Things to Do in the Gothic Quarter of Barcelona on 5 Reasons Why You Need to Visit Sitges, a Gem on Catalonia’s Coast